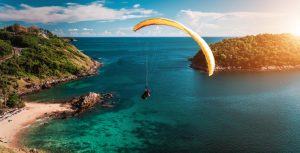 A common item on many people’s bucket lists is parachuting or skydiving. In 2017, the United States Parachute Association estimated that over three million skydives took place. A jump out of airplane is a thrill and great for the adventurous — something that could apply to almost 70% of millennials. It’s both exhilarating and fairly safe, thanks to instructors and precautions being taken every step of the way. Though you can go skydiving yourself, tandem jumps are also popular, especially if you’re new to parachuting and need instruction on how to jump, pilot, and land. So if you’re looking for some adventure and are interested in trying out parachuting, how can you get started and what sorts of things should you know? We’ll cover all that and more below, so read on to get started on a tremendous experience!

Is There a Difference Between Parachuting and Skydiving?
The short answer is that there’s basically no difference! The two words are used fairly interchangeably, since a parachute is deployed during both activities. However, there are a few subtle differences. If someone jumps from an aircraft and immediately puts their parachute out, there’s not really skydiving occurs. The freefall makes skydiving what it is.

And there’s a bit of a cultural difference too, in the way we think about the two words. We might think of members of the military or smokejumpers parachuting, while those looking for a thrill or those who treat it as a sport skydive. (Yes, a sport! Did you know that 230 calories an hour can be burned by skydiving, for the average 150 pound person? Not a bad way to exercise!) But no matter what you call it, instructors will know what you’re talking about and be excited to get you started.

Skydiving Basics
Most aircrafts will attain an altitude of around 13,000 feet, to give the skydiver a solid minute of freefall, usually falling at around 120 miles per hour. With tandem freefalls, you can expect the freefall to be between 45 to 60 seconds, and then the parachute is deployed, and there’s about a four minute canopy ride until you reach the ground. If you’re jumping alone, you’d throw out a pilot chute at around 2,500 feet. With tandem skydives, a drogue chute helps regulate the fall rate.

You also need to be a legal adult to do tandem jumps — that is, 18. If you’re a bit nervous though, take heart, because the FAA mandates that every instructor have a minimum of three years experience skydiving, 500 skydives under their belt, and a master parachute license from an organization that the FAA recognizes. If the instructor belongs to the USPA, they also likely need a certification course from the manufacturer of the equipment they’re using and other such certifications.

A tandem instructor will help you through the whole jump — from the time you leap from the aircraft, to the freefall, managing the canopy, and ultimately landing. It’s ideal way to try skydiving for those new to it!

Where Can I Go Skydiving Near Me?
If you’re hooked now, it’s time to start looking up places you can skydive near you! Luckily a quick Internet search will likely yield a host of options. If you have some adventurous friends, they may even be able to recommend centers near you to try that they had a good experience with.

It’s always suggested that you do your research — check out any reviews online and browse through social media to see what kind of experiences others had. In some cases, a picture really is worth a thousand words, and it can also help you get more amped up for your experience.

Since skydiving is pretty popular, there are likely quite a few places not too far from you where you can try it out.

Take the leap (literally!) and win some major points by trying out skydiving. Just a word of warning though — you might get addicted to the thrill and return again and again.